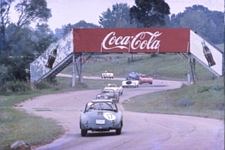 Click here to see what's new on the history pages!

VIR (Virginia International Raceway) is a wonderful 3.2 mile track for sports car racing near Danville, Va. with 12 major turns (the "dangerous dozen"), two blistering straights, and 130' of elevation changes. It was first opened in 1957, but was closed in 1974 - and now spectacularly revived in March 2000.

From the August 1957 VIR race program: "The rolling Virginia hills have been painstakingly clad with an ultra-smooth skin of macadam to provide a course of great natural beauty. The superb spectator visibility is nicely equated to a road layout that will test the best in racing machines and men."

There are frequent updates whenever I get more info
I'm trying to create a complete VIR History on the Web. If you have any race schedules, results, programs, folklore, photos, etc., please put them on the Web or let me borrow a copy to scan in. Many thanks to all who have contributed so far - please contact me if you can help.
Click here for a list of what's new!

The Story of VIR

In 1955, a group of North Carolina sports car enthusiasts, including Ed Welch, Ed Alexander, Dick Snyder, and Hooper Johnson, began searching for a suitable race track location. Through the help of George Arnold and his wife Preston Foote, they found the perfect site just across the state line from Milton, NC on 1200 acres of rolling farmland belonging to the Foote family. Ed Kemm joined the group in 1956 and furnished much-needed capital for Sports Car Enterprises Inc. and the VIR track was paved and opened in 1957.

Click here to read interviews with VIR's founders about the track's beginnings.

In spite of some excellent races, Sports Car Enterprises were unable to draw the necessary spectator crowds and they were forced to give up the lease in 1959. Fortunately, Col. Paul Rembold of Danville took over the lease and VIR became a part of the Danville Civil Air Patrol. The track became a popular place for  racers (and many thousands of spectators) and was operated  by Col. Rembold (and facility manager Henry Wallace) until 1974. The last race was an SCCA Enduro, run October 13, 1974.

VIR was a cow pasture for almost 25 years and was reopened in 2000 - the current track follows the center line and elevation of the old track but has been widened slightly. The new VIR facility is truly spectacular.

Photo of  VIR under construction in 1957
"Ed Kemm, father of VIR, views the fastest straightaway in US sports car racing"

Click here for Phil Allen's comprehensive article on VIR drivers covering the careers of the well-known people who raced at VIR.

John Gunn holds the old track record (2:06.3) in a Formula A Lola-Chevy in 1969.
Click here for complete class lap records.

Carl Zorowski: "Outbraking a competitor going into turn two on the inside, a perfect drift through NASCAR Bend, diving late into four to set up for the following right-hander, establishing the right rhythm through the esses at the Coke Bridge, feeling the steering go light as you apex at nine, the apprehension of a clear track as you crest through ten, accelerating out of Oak Tree, the whine of the engine straining for RPMs at the end of the back straight, braking for the right-hander into the downhill esses, coming out full bore at Hog Pen; the euphoria of a well-driven lap at VIR is an experience that drivers share in a special way with one another and no one else. Like an intense and gratifying love affair the marriage of driver, car, and course produces an intimate experience beyond words and description. VIR was a mistress to be tamed by the union of car and driver comparable to no other. She will be remembered particularly by her drivers in that special way reserved for the satisfaction of a first true love."